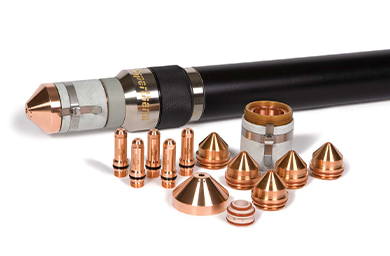 It’s hard to offer an exact (or even an in-exact) estimate of the number of factors that impact the life expectancy of a plasma cutter consumable —operator experience, type and age of the torch, material type and thickness, air quality, etc. However, when the operator understands good piercing and edge-starting techniques which keep molten metal from blowing back onto the torch nozzle (or tip if it is a non-Hypertherm system) then the life of the consumable can be extremely long. Hence, Hypertherm plasma cutter consumables have an edge over conventional plasma cutting machines. 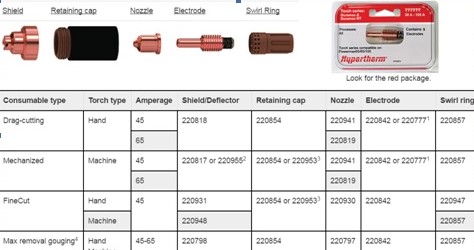 The biggest problem with most plasma cutter torches occurs when hand cutting with exposed (unshielded) nozzle-torch consumables. Ideally, you need to hold a standoff, with an unshielded setup at all amperages greater than 30 amps or so. If the nozzle touches the plate during a cut, it creates an electric current path between the negative electrode, nozzle, and positive plate. This causes a double arc between the electrode and nozzle, and the nozzle and plate, which damages the nozzle’s orifice. When the orifice gets a little damaged, poor angularity is the first thing you’ll notice, followed by more double arcs and more damage. Eventually, you’ll notice slower cut speeds and heavy dross, at which point you’ll likely change your nozzle.

Secondly, some people use a standoff device to hold the torch up off the metal. Unfortunately, molten metal can still blowback during piercing, once again passing electricity from the nozzle to the plate and leading to double arcing. If you have used a handheld torch with an exposed nozzle at more than 30 amps while drag cutting, you’ve likely felt the torch “sticking” to the plate. This is a result of double arcing.

One way around this problem is through the use of shielded torch technology, invented and patented by Hypertherm in the ’80s. The shield works to electrically isolate the nozzle from the plate to totally eliminate double arcing. Hypertherm plasma shielded torches drag cut at up to 200 amps with no friction or double arcing for a dramatic improvement in a plasma cutter consumable’s life and cut quality.

In the last 30 or so years since Hypertherm introduced shielded torch technology, engineers have made enormous strides in extending the life of these consumables. For example, our Duramax torches of Hypertherm plasma systems come with the new standard consumables with nearly all new Powermax systems and as a retrofit torch for older Hypertherm systems and use the shield for just nozzle isolation. The shield and nozzle for these torches use a patented technology called Conical Flow to inject greater airflow around the perimeter of the arc. This increases the energy density of the arc and provides better cooling to the nozzle. This results in no sticking, no double arcing, offering faster-cut speeds, thicker piercing capability, and dramatically longer nozzle life.

So, assuming you are using a Hypertherm plasma Duramax torch with the latest consumable technology, then I would expect you to cut hundreds of feet of metal. In addition, you should be able to make between 600 and 1,200 pieces, after which you would need to replace only your electrode. All your remaining Hypertherm consumables would likely continue to work just fine. Put another way, you should be able to get between 2 and 4 full days of actual arc-on time before needing to replace any of your consumables.

This is why Ador Fontech Limited, the name synonymous with total solutions for any Maintenance & Repair solutions, recommends Hypertherm plasma with Duramax Torch and consumables as a robust cutting solution to all our customers. “Using Spurious/Counterfeit consumables is nothing but a shortcut to machine breakdown & loss of warranty.”